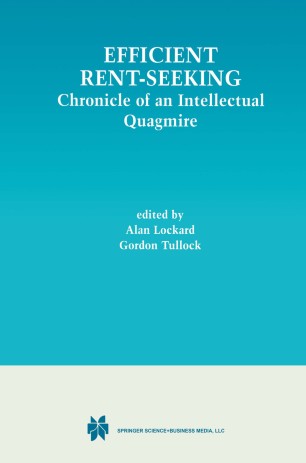 Chronicle of an Intellectual Quagmire

Some time ago one of the editors (Gordon Tullock) stumbled on a paradox in the competition for rents. He asked a previous research assistant (William Hunter) to work out some examples and gave a seminar on it. For reasons he cannot recall (but probably bad) he titled his talk `Efficient Rent Seeking'. As Editor of Public Choice he was able to publish without a referee. Incidentally, The Journal of Political Economy had turned it down on the grounds that the economy could not be that chaotic, and hence there must be something wrong even if the referee couldn't put his finger on it.
There followed a long series of articles, mainly in Public Choice, in which various distinguished scholars proposed solutions to the paradox. The editor responded by finding fault with these solutions. In this case the editor was arguing against interest. He, like the referee for the JPE, believed that the market works, if not perfectly, at least very well. Nevertheless, the paradox resisted and persisted. It was like the paradox of the liar, and indeed in some cases did show exactly that paradox.
Eventually everyone, including the editor, grew tired of the matter and the discussion sort of wound down, although it could not be said that it was either solved or even abated. It also began to appear that it had a much larger scope than just competitive rent seeking. Any contest for wealth, privilege, or prestige in which the chances of winning were affected by the investment of the contestants would appear to be subject to the same problem. The sum of the investments in equilibrium might be much less than the prize or much more. It depended on the structure of the contest, but the range of structures seemed to include almost all economic competition. Clearly, from the standpoint of economics, this was a distressing conclusion. Perhaps the whole vast structure of economic analysis rested on faulty foundations.
Speaking frankly, neither of the editors thinks the situation is that desperate. We feel that there is a logical solution, even if we do not know what it is. The purpose of this volume is to attempt to get economists to turn to the problem and, hopefully, solve the paradox. We present here a substantial portion of the literature on the matter. We hope that the readers will be stimulated to think about the problem and, even more, we hope they will be able to solve it.