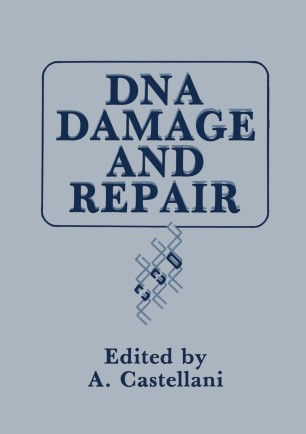 The First International Congress on DNA Damage and Repair was held in Rome, Italy, July 12-17, 1987. It was organized by the Italian Com­ mission for Nuclear Alternative Energy Sources. The subject of DNA damage and repair involves almost all the fields ofbidogical sciences. Some of the more prominent ones include carcino­ genesis, photobiology, radiation biology, aging, enzymology, genetics, and molecular biology. These individual fields have their own interna­ tional meetings and although the meetings often have sessions devoted to DNA repair, they do not bring together a wide diversity of international workers in the field to exchange ideas. The purpose of the Congress was to facilitate such an exchange among scientists representing many fields of endeavor and many countries. The 37 manuscripts in this volume, presented by the invited spea­ kers during the four and half days of the Congress, encompass the field of DNA damage and repair. They cover biological systems ranging from mo­ lecules to humans and deal with damages and repair after treatment of cells with various types of radiations, chemicals, and exogenous and en­ dogenous oxidative damages. The Congress and its Proceedings are dedicated to two international leaders in the field of DNA damage and repair, Alexander Hollaender of the United States and Adriano Buzzati Traverso of Italy. Hollaender, who died in December 1986, was one of the first investigators to recognize the damage to DNA was important in cell killing and mutagenesis. His early work indicated that cells could recover from radiation injury.