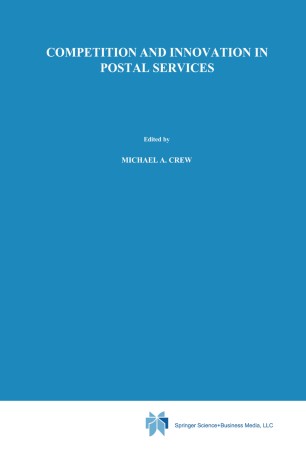 Competition and Innovation in Postal Services

Any Chainnan of the British Post Office dwells in the shadow of Rowland Hill, and, if he were an honest man, he probably from time to time, while singing the praises of Rowland Hill, as is his due, thinks a silent thought of sympathy for his predecessor Colonel Maberly, the head of the Post Office, the Champion of established orthodoxy, the leader of the Professionals, who had to endure the irresistible force of Hill's arguments combined with his skills as a pamphleteer, agitator, and political propagandist. My favorite passage of the book Royal Mail by Martin Daunton (1985) shows how much the Post Office of the day needed a Rowland Hill to challenge Colonel Maberly and all that he stood for. I quote from a passage describing how the Colonel, when he arrived at about 11:00 a.m. and while enjoying his breakfast, listened to his private secretary reading the morning's correspondence. Daunton records: The Colonel, still half engaged with his private correspondence, would hear enough to make him keep up a rumring commentary of disparaging grunts, "Pooh! stuff! upon my soul!" etc.