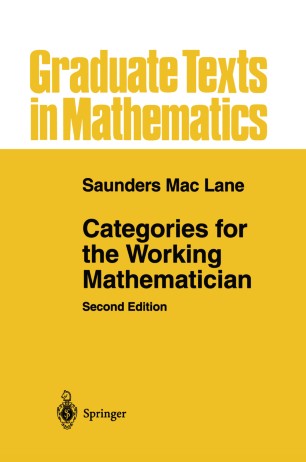 Categories for the Working Mathematician

Categories for the Working Mathematician provides an array of general ideas useful in a wide variety of fields. Starting from the foundations, this book illuminates the concepts of category, functor, natural transformation, and duality. The book then turns to adjoint functors, which provide a description of universal constructions, an analysis of the representations of functors by sets of morphisms, and a means of manipulating direct and inverse limits. These categorical concepts are extensively illustrated in the remaining chapters, which include many applications of the basic existence theorem for adjoint functors. The categories of algebraic systems are constructed from certain adjoint-like data and characterized by Beck's theorem. After considering a variety of applications, the book continues with the construction and exploitation of Kan extensions. This second edition includes a number of revisions and additions, including two new chapters on topics of active interest. One is on symmetric monoidal categories and braided monoidal categories and the coherence theorems for them. The second describes 2-categories and the higher dimensional categories which have recently come into prominence. The bibliography has also been expanded to cover some of the many other recent advances concerning categories.

“The book under review is an introduction to the theory of categories which, as the title suggests, is addressed to the (no-nonsense) working mathematician, thus presenting the ideas and concepts of Category Theory in a broad context of mainstream examples (primarily from algebra). … the book remains an authoritative source on the foundations of the theory and an accessible first introduction to categories. … It is very well-written, with plenty of interesting discussions and stimulating exercises.” (Ittay Weiss, MAA Reviews, July, 2014)

Categories for the Working Mathematician