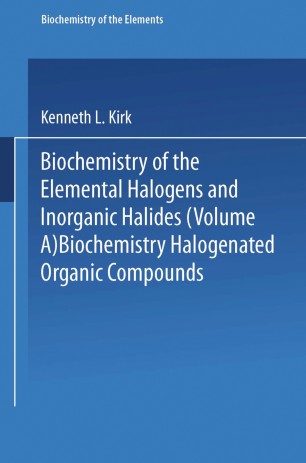 Part of the Biochemistry of the Elements book series (BOTE, volume 9A+B)

Biochemistry of Halogenated Organic Compounds has been written as a general reference source for researchers in several related areas, including organic chemists, medicinal chemists, pharmacologists, toxicologists, and medical researchers. The development of halogenated compounds as medicinal agents and pharmacological tools and the fascinating biochemi­ cal processes that have been discovered and studied using these analogues have generated extremely active areas of research and an enormous volume of literature. Thus, halogenated organic compounds pervade every aspect of biochemistry, a fact made apparent by the numerous reviews and monographs available on individual topics-halogenated nucleosides, halogenated carbohydrates, and so forth. Given the quantity of material already written on these topics, some of which material is quite current, it might be asked whether a one-volume review of these subjects is useful, or possible. Having now completed this work, I feel the answer to both questions is an emphatic yes. There are fascinating stories to be related in each area, and, where appropriate, I have attempted to develop these topics . from a historical perspective. For example, the discovery of the anticancer activity of fluorouracil, the unraveling of the several mechanisms of its action, and the development of a host of later generations of anticancer and antiviral agents based on the parent fluoro-, iodo-, bromo-, and trifluoromethylpyrimidines were, and are, contributions of major magnitude to medical science.