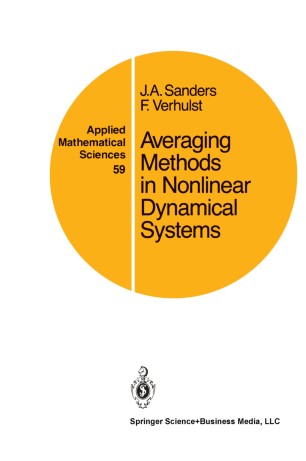 In this book we have developed the asymptotic analysis of nonlinear dynamical systems. We have collected a large number of results, scattered throughout the literature and presented them in a way to illustrate both the underlying common theme, as well as the diversity of problems and solutions. While most of the results are known in the literature, we added new material which we hope will also be of interest to the specialists in this field. The basic theory is discussed in chapters two and three. Improved results are obtained in chapter four in the case of stable limit sets. In chapter five we treat averaging over several angles; here the theory is less standardized, and even in our simplified approach we encounter many open problems. Chapter six deals with the definition of normal form. After making the somewhat philosophical point as to what the right definition should look like, we derive the second order normal form in the Hamiltonian case, using the classical method of generating functions. In chapter seven we treat Hamiltonian systems. The resonances in two degrees of freedom are almost completely analyzed, while we give a survey of results obtained for three degrees of freedom systems. The appendices contain a mix of elementary results, expansions on the theory and research problems.