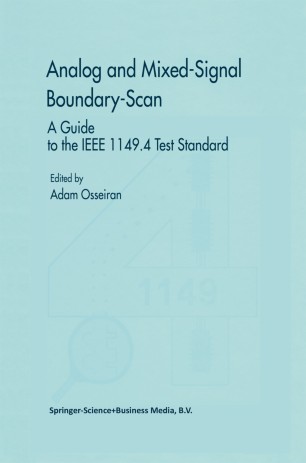 This book contains more than the IEEE Standard 1149.4. It also contains the thoughts of those who developed the standard. Adam Osseiran has edited the original writings of Brian Wilkins, Colin Maunder, Rod Tulloss, Steve Sunter, Mani Soma, Keith Lofstrom and John McDermid, all of whom have personally contributed to this standard. To preserve the original spirit, only minor changes were made, and the reader will sense a chapter-to-chapter variation in the style of expression. This may appear awkward to some, although I found the Iack of monotonicity refreshing. A system consists of a specific organization of parts. The function of the system cannot be performed by an individual part or even a disorganized collection ofthe same parts. Testing has a system-like characteristic. Testing of a system does not follow directly from the testing of its parts, and a system built with testable parts can sometimes be impossible to test. Therefore, testability of the system must be organized. Some years ago, the IEEE published the boundary-scan Standard 1149.1. That Standard provided an architecture for digital VLSI chips. The chips designed with the 1149.1 architecture can be integrated into a testable system. However, many systems today contain both analog and digital chips. Even if all digital chips are compliant with the standard, the testability of a mixed-signal system cannot be guaranteed. The new Standard 1149.4, described in this book, extends the previous architecture to mixed-signal systems.

Adam Osseiran is Professor of Electrical Engineering at the Engineering Institute of Geneva, Switzerland and the European Design and Test Specialist at Fluence Technology Inc., Beaverton, Oregon, USA. He is the present Chair of the IEEE 1149.4 Working Group.