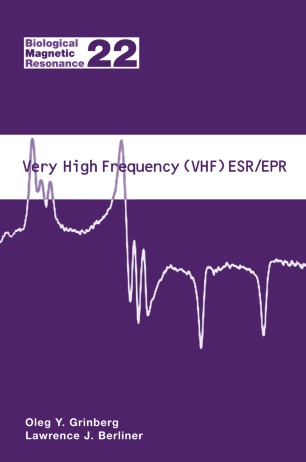 The field of Very High Frequency EPR (VHF EPR) or sometimes called Very High Field EPR (conveniently, also abbreviated as VHF EPR) has blossomed during the past decade, especially after the original pioneering work of Ya. S. Lebedev and his group at the Institute of Chemical Physics, Russian Academy of Sciences in Moscow. Although Lebedev suffered heavily under the economic constraints of the communist Soviet Union and then succumbed to cancer at the peak of his scientific career, his groundbreaking work from the 1970's is still considered today to be the 'gold standard' by researchers practicing EPR at high magnetic fields. A stimulus for the production of this book is the legacy of Yakov Levedev in his students now residing in academic positions in the US and elsewhere. The aim of this book is to highlight the state of this growing field. This is an attempt to cover the full scope of VHF EPR in a single volume. The idea for this volume came to the editors at the 2001 Rocky Mountain Analytical Conference during the 24th International EPR Symposium chaired by Sandra and Gareth Eaton. VHF EPR was presented as an independent research field at a workshop organized by LC BruneI and supported by the National High Magnetic Field Laboratory, a National Science Foundation funded facility at Florida State University.