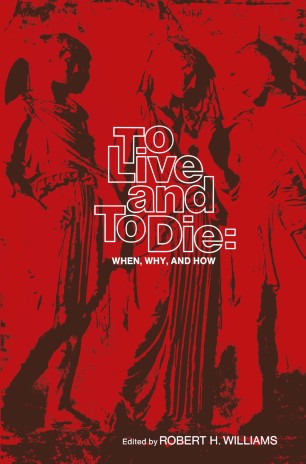 To Live and To Die: When, Why, and How

In the 1960's marked changes occurred throughout the world in philosophies and policies related to man's role in life. These changes, prompted predominantly by extensive increases in knowledge and popula­ tion density, have produced increased pleasures as well as problems. The rising number of people and improved methods of communication and transportation have caused more relationships among people, with their pleasures, competitions, jealousies, conflicts of interest, oppressions, and crimes. Large assortments of drugs have been developed and are easily obtained. There are drugs to speed us up, slow us down, make us sleep, change our perspectives on life, promote propagation of life or prevent it, prolong life or terminate it, and modify the course of life in many ways. Also, numerous mechanical devices have been developed that influence the propagation of life, the termination of life, and the manner in which we live. Many people have changed their overall goals in life, and in par­ ticular have experienced major changes in attitudes and policies applying to sexual activity, marriage, birth control, abortion, welfare, children, old people, criminals, economics, social status, careers, education, euthanasia, and suicide. There also has been marked enlightenment concerning the effect of the chemical and physical status of the brain upon normal and abnormal thinking and behavior.