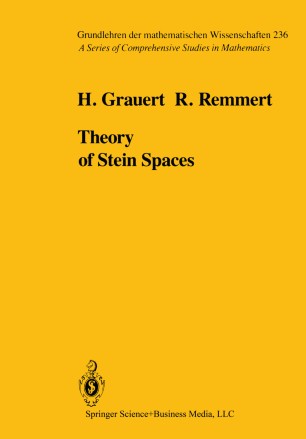 1. The classical theorem of Mittag-Leffler was generalized to the case of several complex variables by Cousin in 1895. In its one variable version this says that, if one prescribes the principal parts of a merom orphic function on a domain in the complex plane e, then there exists a meromorphic function defined on that domain having exactly those principal parts. Cousin and subsequent authors could only prove the analogous theorem in several variables for certain types of domains (e. g. product domains where each factor is a domain in the complex plane). In fact it turned out that this problem can not be solved on an arbitrary domain in em, m ~ 2. The best known example for this is a "notched" bicylinder in 2 2 e . This is obtained by removing the set { (z , z ) E e 11 z I ~ !, I z 1 ~ !}, from 1 2 1 2 2 the unit bicylinder, ~ :={(z , z ) E e llz1 < 1, lz1 < 1}. This domain D has 1 2 1 2 the property that every function holomorphic on D continues to a function holo­ morphic on the entire bicylinder. Such a phenomenon never occurs in the theory of one complex variable. In fact, given a domain G c e, there exist functions holomorphic on G which are singular at every boundary point of G.