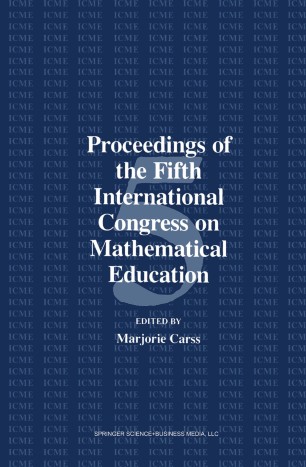 Proceedings of the Fifth International Congress on Mathematical Education

International Congresses on Mathematical Education (ICMEs), under the auspices of the International Commission on Mathematical Instruction, are held every four years. Previous Congresses have been held in France (Lyons), England (Exeter), the Federal Republic of Germany (Karlsruhe), and the United States of America (Berkeley). The Fifth International Congress on Mathematical Education (lCME 5) was held in Adelaide, Australia, from August 24-30, 1984. More than 1800 participants from over 70 countries participated in the Congress, while some additional 200 people attended social functions and excursions. The program for ICME 5 was planned and structured by an International Program Committee, and implemented by the National Program Committee in Australia. For the main body of the program, Chief Organisers, assisted by Australian Coordinators, were invited to plan and prepare the individual components of the program which addressed a wide range of topics and interest areas. Each of these teams involved many individuals from around the world in the detailed planning and preparation of the working sessions for their area of program responsibility. For the actual working sessions at the Congress, the smallest group had some 60 members, while the largest had well over 300. In addition to the working sessions, there were three major plenary addresses, several specially invited presentations, and over 420 individual papers in the form of short communications, either as posters or brief talks.