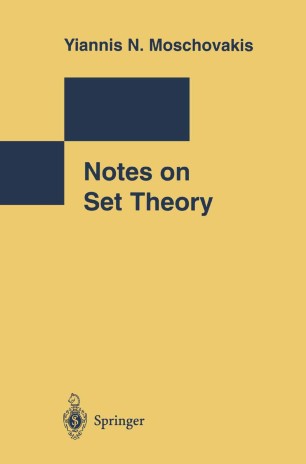 What this book is about. The theory of sets is a vibrant, exciting math­ ematical theory, with its own basic notions, fundamental results and deep open problems, and with significant applications to other mathematical theories. At the same time, axiomatic set theory is often viewed as a foun­ dation ofmathematics: it is alleged that all mathematical objects are sets, and their properties can be derived from the relatively few and elegant axioms about sets. Nothing so simple-minded can be quite true, but there is little doubt that in standard, current mathematical practice, "making a notion precise" is essentially synonymous with "defining it in set theory. " Set theory is the official language of mathematics, just as mathematics is the official language of science. Like most authors of elementary, introductory books about sets, I have tried to do justice to both aspects of the subject. From straight set theory, these Notes cover the basic facts about "ab­ stract sets," including the Axiom of Choice, transfinite recursion, and car­ dinal and ordinal numbers. Somewhat less common is the inclusion of a chapter on "pointsets" which focuses on results of interest to analysts and introduces the reader to the Continuum Problem, central to set theory from the very beginning.