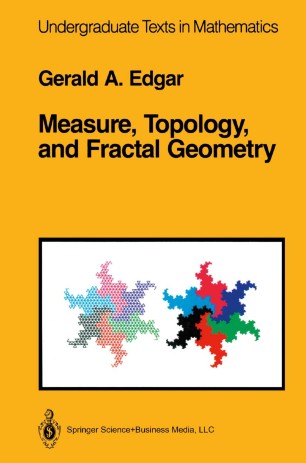 From the reviews: "In the world of mathematics, the 1980's might well be described as the "decade of the fractal". Starting with Benoit Mandelbrot's remarkable text The Fractal Geometry of Nature, there has been a deluge of books, articles and television programmes about the beautiful mathematical objects, drawn by computers using recursive or iterative algorithms, which Mandelbrot christened fractals. Gerald Edgar's book is a significant addition to this deluge. Based on a course given to talented high- school students at Ohio University in 1988, it is, in fact, an advanced undergraduate textbook about the mathematics of fractal geometry, treating such topics as metric spaces, measure theory, dimension theory, and even some algebraic topology. However, the book also contains many good illustrations of fractals (including 16 color plates), together with Logo programs which were used to generate them. ... Here then, at last, is an answer to the question on the lips of so many: 'What exactly is a fractal?' I do not expect many of this book's readers to achieve a mature understanding of this answer to the question, but anyone interested in finding out about the mathematics of fractal geometry could not choose a better place to start looking." #Mathematics Teaching#1