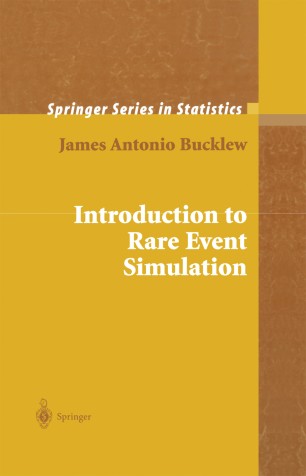 Until now, this area has a reputation among simulation practitioners of requiring a great deal of technical and probabilistic expertise. This text keeps the mathematical preliminaries to a minimum with the only prerequisite being a single large deviation theory result that is given and proved in the text. Large deviation theory is a burgeoning area of probability theory and many of the results in it can be applied to simulation problems. Rather than try to be as complete as possible in the exposition of all possible aspects of the available theory, the book concentrates on demonstrating the methodology and the principal ideas in a fairly simple setting.

The book contains over 50 figures and detailed simulation case studies covering a wide variety of application areas including statistics, telecommunications, and queueing systems.

James A. Bucklew holds the rank of Professor with appointments in the Department of Electrical and Computer Engineering and in the Department of Mathematics at the University of Wisconsin-Madison. He is a Fellow of the Institute of Electrical and Electronics Engineers and the author of Large Deviation Techniques in Decision, Simulation, and Estimation.