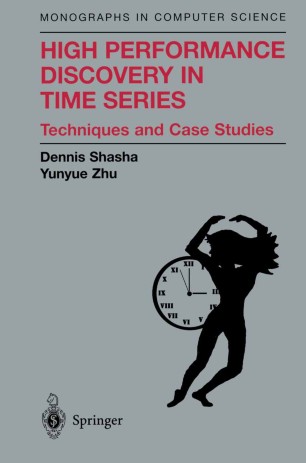 Part of the Monographs in Computer Science book series (MCS)

High Performance Discovery in Time Series presents rapid-discovery techniques for finding portions of time series with many events (i.e., gamma-ray scatterings) and finding closely related time series (i.e., highly correlated price and return histories, or musical melodies). A typical time-series technique may compute a "consensus" time series—from a collection of time series—to use regression analysis for predicting future time points. By contrast, this book aims at efficient discovery in time series, rather than prediction, and its novelty lies in its algorithmic contributions and its simple, practical algorithms and case studies. It presumes familiarity with only basic calculus and some linear algebra.

*Offers self-contained descriptions of wavelets, fast Fourier transforms, and sketches as they apply to time-series analysis

This new monograph provides a technical survey of concepts and techniques for describing and analyzing large-scale time-series data streams. It offers essential coverage of the topic for computer scientists, physicists, medical researchers, financial mathematicians, musicologists, and researchers and professionals who must analyze massive time series. In addition, it can serve as an ideal text/reference for graduate students in many data-rich disciplines.

"The goal of the book is to show how to design fast scalable algorithms for the analysis of time series when much data must be analyzed. … A linear time filter is constructed in such a way that no burst will be missed and nearly all false positives are eliminated. … the book aims at efficient discovery in time series and presents practical algorithms for this task." (Jiri Andel, Mathematical Reviews, 2005)