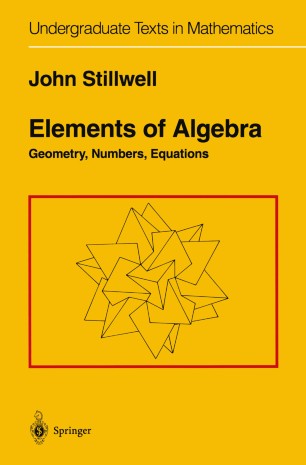 Algebra is abstract mathematics - let us make no bones about it - yet it is also applied mathematics in its best and purest form. It is not abstraction for its own sake, but abstraction for the sake of efficiency, power and insight. Algebra emerged from the struggle to solve concrete, physical problems in geometry, and succeeded after 2000 years of failure by other forms of mathematics. It did this by exposing the mathematical structure of geometry, and by providing the tools to analyse it. This is typical of the way algebra is applied; it is the best and purest form of application because it reveals the simplest and most universal mathematical structures. The present book aims to foster a proper appreciation of algebra by showing abstraction at work on concrete problems, the classical problems of construction by straightedge and compass. These problems originated in the time of Euclid, when geometry and number theory were paramount, and were not solved until th the 19 century, with the advent of abstract algebra. As we now know, alge­ bra brings about a unification of geometry, number theory and indeed most branches of mathematics. This is not really surprising when one has a historical understanding of the subject, which I also hope to impart.

"...The book is written in a very clear and pleasing style. Each of the 9 chapters of the book concludes with a section called "Discussions", which contains very interesting and valuable historical information and comments on the topics presented in the respective chapter. We strongly recommend this nice volume not only to beginners but also to experts."--MATHEMATICAL REVIEWS