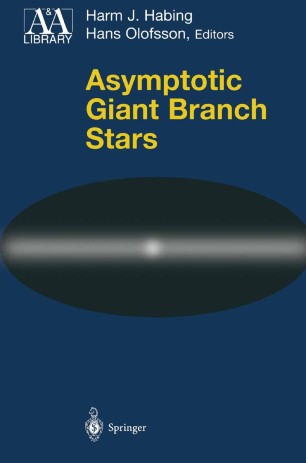 This book deals with stars during a short episode before they undergo a ma­ jor, and fatal, transition. Soon the star will stop releasing nudear energy, it will become a planetary nebula for abrief but poetic moment, and then it will turn into a white dwarf and slowly fade out of sight. Just before this dramatic change begins the star has reached the highest luminosity and the largest diameter in its existence, and while it is a star detectable in galaxies beyond the Local Group, its structure contains already the inconspicuous white dwarf it will become. It is called an "asymptotic giant branch star" or "AGB star". Over the last 30 odd years AGB stars have become a topic of their own although individual members of this dass had already been studied for cen­ turies without realizing what they were. In the early evolution, so called "E-AGB"-phase, the stars are a bit bluer than, but otherwise very similar to, what are now called red giant branch stars (RGB stars). It is only in the sec­ ond half of their anyhow brief existence that AGB stars differ fundamentally from RGB stars.