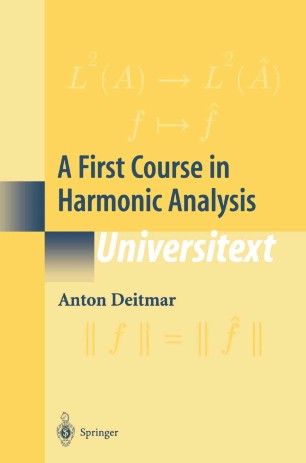 A First Course in Harmonic Analysis

This book is a primer in harmonic analysis on the undergraduate level. It gives a lean and streamlined introduction to the central concepts of this beautiful and utile theory. In contrast to other books on the topic, A First Course in Harmonic Analysis is entirely based on the Riemann integral and metric spaces instead of the more demanding Lebesgue integral and abstract topology. Nevertheless, almost all proofs are given in full and all central concepts are presented clearly.
The first aim of this book is to provide an introduction to Fourier analysis, leading up to the Poisson Summation Formula. The second aim is to make the reader aware of the fact that both principal incarnations of Fourier theory, the Fourier series and the Fourier transform, are special cases of a more general theory arising in the context of locally compact abelian groups. The third goal of this book is to introduce the reader to the techniques used in harmonic analysis of noncommutative groups. These techniques are explained in the context of matrix groups as a principal example.
The reader interested in the central concepts and results of harmonic analysis will benefit from the streamlined and direct approach of this book.
Professor Deitmar holds a Chair in Pure Mathematics at the University of Exeter, U.K. He is a former Heisenberg fellow and was awarded the main prize of the Japanese Association of Mathematical Sciences in 1998. In his leisure time he enjoys hiking in the mountains and practising Aikido.