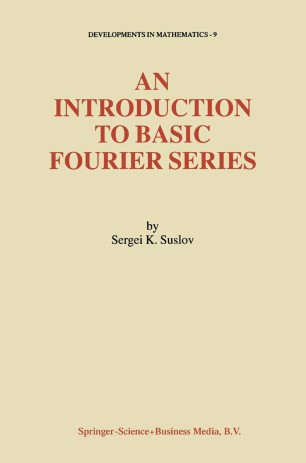 An Introduction to Basic Fourier Series

Part of the Developments in Mathematics book series (DEVM, volume 9)

It was with the publication of Norbert Wiener's book ''The Fourier In­ tegral and Certain of Its Applications" [165] in 1933 by Cambridge Univer­ sity Press that the mathematical community came to realize that there is an alternative approach to the study of c1assical Fourier Analysis, namely, through the theory of c1assical orthogonal polynomials. Little would he know at that time that this little idea of his would help usher in a new and exiting branch of c1assical analysis called q-Fourier Analysis. Attempts at finding q-analogs of Fourier and other related transforms were made by other authors, but it took the mathematical insight and instincts of none other then Richard Askey, the grand master of Special Functions and Orthogonal Polynomials, to see the natural connection between orthogonal polynomials and a systematic theory of q-Fourier Analysis. The paper that he wrote in 1993 with N. M. Atakishiyev and S. K Suslov, entitled "An Analog of the Fourier Transform for a q-Harmonic Oscillator" [13], was probably the first significant publication in this area. The Poisson k~rnel for the contin­ uous q-Hermite polynomials plays a role of the q-exponential function for the analog of the Fourier integral under considerationj see also [14] for an extension of the q-Fourier transform to the general case of Askey-Wilson polynomials. (Another important ingredient of the q-Fourier Analysis, that deserves thorough investigation, is the theory of q-Fourier series.