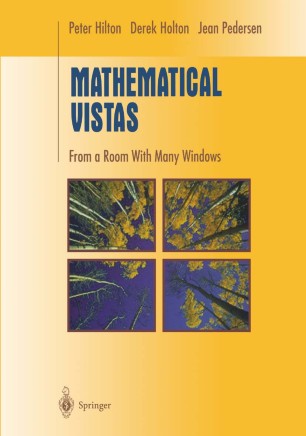 From a Room with Many Windows

Focusing YourAttention We have called this book Mathematical Vistas because we have already published a companion book MathematicalRefiections in the same series;1 indeed, the two books are dedicated to the same principal purpose - to stimulate the interest ofbrightpeople in mathematics.Itis not our intention in writing this book to make the earlier book aprerequisite, but it is, of course, natural that this book should contain several references to its predecessor. This is especially - but not uniquely- true of Chapters 3, 4, and 6, which may be regarded as advanced versions of the corresponding chapters in Mathematical Reflections. Like its predecessor, the present work consists of nine chapters, each devoted to a lively mathematical topic, and each capable, in principle, of being read independently of the other chapters.' Thus this is not a text which- as is the intention of most standard treatments of mathematical topics - builds systematically on certain common themes as one proceeds 1Mathematical Reflections - In a Room with Many Mirrors, Springer Undergraduate Texts in Math­ ematics, 1996; Second Printing 1998. We will refer to this simply as MR. 2There was an exception in MR; Chapter 9 was concerned with our thoughts on the doing and teaching of mathematics at the undergraduate level.