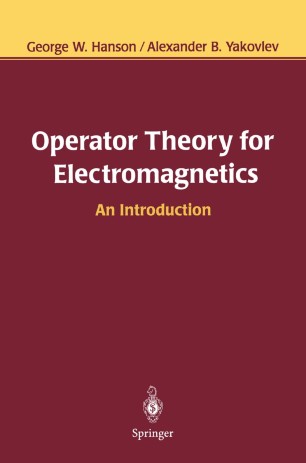 The purpose of this book is to describe methods for solving problems in applied electromagnetic theory using basic concepts from functional anal­ ysis and the theory of operators. Although the book focuses on certain mathematical fundamentals, it is written from an applications perspective for engineers and applied scientists working in this area. Part I is intended to be a somewhat self-contained introduction to op­ erator theory and functional analysis, especially those elements necessary for application to problems in electromagnetics. The goal of Part I is to ex­ plain and synthesize these topics in a logical manner. Examples principally geared toward electromagnetics are provided. With the exception of Chapter 1, which serves as a review of basic electromagnetic theory, Part I presents definitions and theorems along with associated discussion and examples. This style was chosen because it allows one to readily identify the main concepts in a particular section. A proof is provided for all theorems whose proof is simple and straightforward. A proof is also provided for theorems that require a slightly more elaborate proof, yet one that is especially enlightening, being either constructive or illustrative. Generally. theorems are stated but not proved in cases where either the proof is too involved or the details of the proof would take one too far afield of the topic at hand, such as requiring additional lemmas that are not clearly useful in applications.