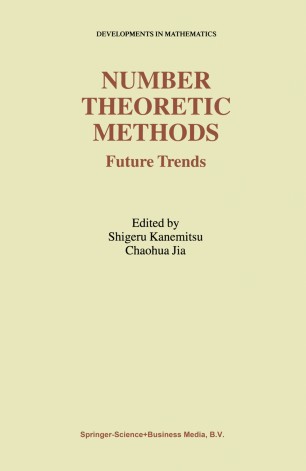 Part of the Developments in Mathematics book series (DEVM, volume 8)

This volume contains the proceedings of the very successful second China-Japan Seminar held in lizuka, Fukuoka, Japan, during March 12-16, 2001 under the support of the Japan Society for the Promotion of Science (JSPS) and the National Science Foundation of China (NSFC), and some invited papers of eminent number-theorists who visited Japan during 1999-2001 at the occasion of the Conference at the Research Institute of Mathematical Sciences (RIMS), Kyoto University. The proceedings of the 1st China-Japan Seminar held in September 1999 in Beijing has been published recently {2002) by Kluwer as DEVM 6 which also contains some invited papers. The topics of that volume are, however, restricted to analytic number theory and many papers in this field are assembled. In this volume, we return to the lines of the previous one "Number Theory and its Applications", published as DEVM 2 by Kluwer in 1999 and uphold the spirit of presenting various topics in number theory and related areas with possible applica­ tions, in a unified manner, and this time in nearly a book form with a well-prepared index. We accomplish this task by collecting highly informative and readable survey papers (including half-survey type papers), giving overlooking surveys of the hith­ erto obtained results in up-to-the-hour form with insight into the new developments, which are then analytically continued to a collection of high standard research papers which are concerned with rather diversed areas and will give good insight into new researches in the new century.