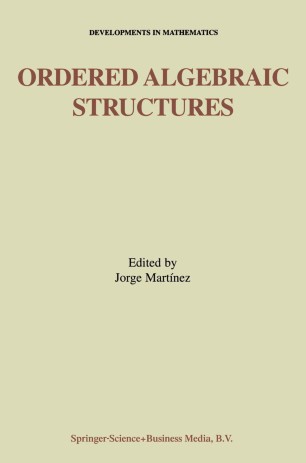 Proceedings of the Gainesville Conference Sponsored by the University of Florida 28th February — 3rd March, 2001

Part of the Developments in Mathematics book series (DEVM, volume 7)

From the 28th of February through the 3rd of March, 2001, the Department of Math­ ematics of the University of Florida hosted a conference on the many aspects of the field of Ordered Algebraic Structures. Officially, the title was "Conference on Lattice­ Ordered Groups and I-Rings", but its subject matter evolved beyond the limitations one might associate with such a label. This volume is officially the proceedings of that conference, although, likewise, it is more accurate to view it as a complement to that event. The conference was the fourth in wh at has turned into aseries of similar conferences, on Ordered Algebraic Structures, held in consecutive years. The first, held at the University of Florida in Spring, 1998, was a modest and informal affair. The fifth is in the final planning stages at this writing, for March 7-9, 2002, at Vanderbilt University. And although these events remain modest and reasonably informal, their scope has broadened, as they have succeeded in attracting mathematicians from other, related fields, as weIl as from more distant lands.