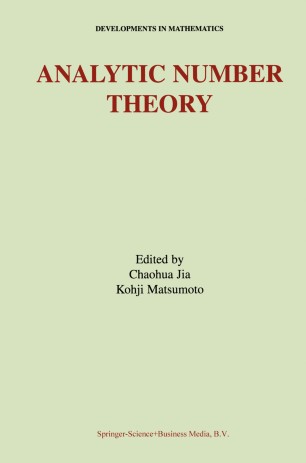 Part of the Developments in Mathematics book series (DEVM, volume 6)

From September 13 to 17 in 1999, the First China-Japan Seminar on Number Theory was held in Beijing, China, which was organized by the Institute of Mathematics, Academia Sinica jointly with Department of Mathematics, Peking University. TE:m Japanese Professors and eighteen Chinese Professors attended this seminar. Professor Yuan Wang was the chairman, and Professor Chengbiao Pan was the vice-chairman. This seminar was planned and prepared by Professor Shigeru Kanemitsu and the first-named editor. Talks covered various research fields including analytic number theory, algebraic number theory, modular forms and transcendental number theory. The Great Wall and acrobatics impressed Japanese visitors. From November 29 to December 3 in 1999, an annual conference on analytic number theory was held in Kyoto, Japan, as one of the conferences supported by Research Institute of Mathematical Sciences (RIMS), Kyoto University. The organizer was the second-named editor. About one hundred Japanese scholars and some foreign visitors com­ ing from China, France, Germany and India attended this conference. Talks covered many branches in number theory. The scenery in Kyoto, Arashiyama Mountain and Katsura River impressed foreign visitors. An informal report of this conference was published as the volume 1160 of Surikaiseki Kenkyusho Kokyuroku (June 2000), published by RIMS, Ky­ oto University. The present book is the Proceedings of these two conferences, which records mainly some recent progress in number theory in China and Japan and reflects the academic exchanging between China and Japan.