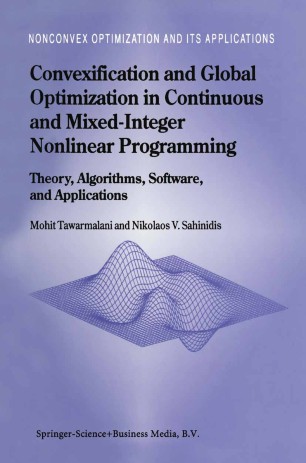 Convexification and Global Optimization in Continuous and Mixed-Integer Nonlinear Programming

Part of the Nonconvex Optimization and Its Applications book series (NOIA, volume 65)

Interest in constrained optimization originated with the simple linear pro­ gramming model since it was practical and perhaps the only computationally tractable model at the time. Constrained linear optimization models were soon adopted in numerous application areas and are perhaps the most widely used mathematical models in operations research and management science at the time of this writing. Modelers have, however, found the assumption of linearity to be overly restrictive in expressing the real-world phenomena and problems in economics, finance, business, communication, engineering design, computational biology, and other areas that frequently demand the use of nonlinear expressions and discrete variables in optimization models. Both of these extensions of the linear programming model are NP-hard, thus representing very challenging problems. On the brighter side, recent advances in algorithmic and computing technology make it possible to re­ visit these problems with the hope of solving practically relevant problems in reasonable amounts of computational time. Initial attempts at solving nonlinear programs concentrated on the de­ velopment of local optimization methods guaranteeing globality under the assumption of convexity. On the other hand, the integer programming liter­ ature has concentrated on the development of methods that ensure global optima. The aim of this book is to marry the advancements in solving nonlinear and integer programming models and to develop new results in the more general framework of mixed-integer nonlinear programs (MINLPs) with the goal of devising practically efficient global optimization algorithms for MINLPs.