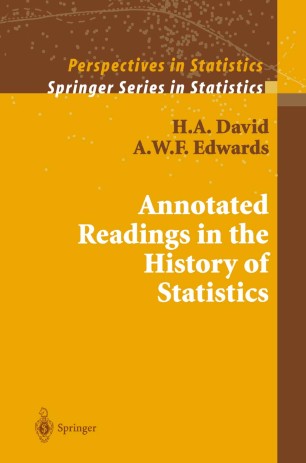 Annotated Readings in the History of Statistics

Interest in the his tory of statistics has grown substantially in recent years and the subject is now covered by a number of excellent books. S. M. Stigler's The History of Statistics (19S6) gives an overview up to 1900 while Anders Hald's two encyclopedic volumes A History of Probability and Statistics before 1750 and A History of Mathematical Statistics f'T'Om 1750 to 1930, published in 1990 and 1995, provide detailed mathematical discussion of the major contributions up to 1930. Hald's books have re­ moved Isaac Todhunter's A History of Probability from the pedestal which it occupied for a century and a quarter and rendered Karl Pearson's Lec­ ture Notes of mainly historical interest themselves. Journal papers have appeared on specific topics, especially in the series "Studies in the History of Probability and Statistics" in Biometrika and in the long sequence of papers in Archive for the History of the Exact Sciences by O. Sheynin. The two volumes of reprinted papers, mostly from Biometrika, issued in 1970 and 1977 have proved particularly valuable. More recently, many important papers published since 1900 have been reprinted with commentaries in the three-volume Breakth'T'Oughs in Statistics (1992-1997). Stigler's Statistics on the Table (1999) provides illuminating vignettes. In addition, specialized books have appeared on particular topics, such as A. I. Dale's A History of Inverse P'T'Obability (1991, 1999) and R. W. Fare­ brother's Fitting Linear Relationships (199S). The pioneering book on the early period, F. N.