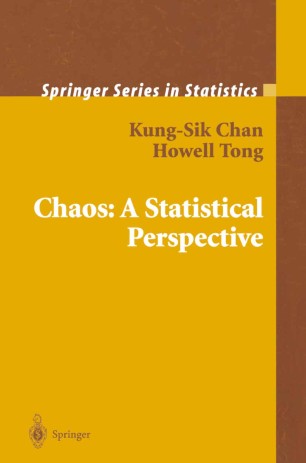 It was none other than Henri Poincare who at the turn of the last century, recognised that initial-value sensitivity is a fundamental source of random­ ness. For statisticians working within the traditional statistical framework, the task of critically assimilating randomness generated by a purely de­ terministic system, often known as chaos, is an intellectual challenge. Like some other statisticians, we have taken up this challenge and our curiosity as reporters and participants has led us to investigate beyond the earlier discoveries in the field. Earlier statistical work in the area was mostly con­ cerned with the estimation of what is sometimes imprecisely called the fractal dimension. During the different stages of our writing, substantial portions of the book were used in lectures and seminars. These include the DMV (German Mathematical Society) Seminar Program, the inaugural session of lectures to the Crisis Points Project at the Peter Wall Institute of Advanced Stud­ ies, University of British Columbia and the graduate courses on Time Series Analysis at the University of Iowa, the University of Hong Kong, the Lon­ don School of Economics and Political Science, and the Chinese University of Hong Kong. We have therefore benefitted greatly from the comments and suggestions of these audiences as well as from colleagues and friends. We are grateful to them for their contributions. Our special thanks go to Colleen Cutler, Cees Diks, Barbel FinkensHidt, Cindy Greenwood, Masakazu Shi­ mada, Floris Takens and Qiwei Yao.