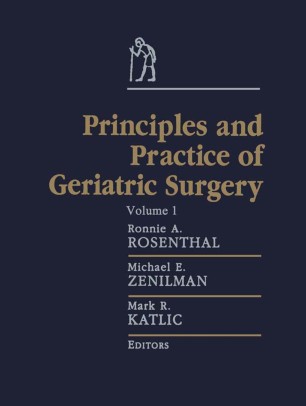 Principles and Practice of Geriatric Surgery

More than two decades ago, in response to the special healthcare needs of the aging Ameriean population, interest in the field of geriatrie medieine began to grow and blossom in the United States. In 1984 and 1985, under the editorialleadership of Christine K. Cassel and William R. Hazzard, respectively, two major textbooks devoted to the medieal care of aged patients were published. These scholarly, comprehensive texts provided insight into the principles of aging and guidance in the care of the geriatrie patient. Three editions later, the need to understand the special issues involved in the medieal care of the elderly is widely accepted by intemists, primary care providers, and medieal specialists. For the editors of this book, the special issues involved in the surgieal care of the elderly have been apparent for nearly as long. Although there have been a few scholarly texts on the subject, including one in 1990 by Mark R. Katlic, general acceptance of the concept of geriatrie surgery by our surgieal and medieal colleagues has, however, lagged. This is not the result of a proportionately smaller number of older patients with surgieal disease, because cancer, cardiovascular disease, and orthopedie problems are diseases, of the aged. It is rather the result of uncertainty about the value of surgery in the elderly and concems about the risks of operations. In the past, such concems prevented primary care givers from referring patients for surgieal care and prevented surgeons from agreeing to operate.

"...this book is a well-written, important contribution to the practice of medicine, as well as to the practice of surgery... It belongs in the hospital or personal library of any physician who is likely to come in contact with the frail, elderly patient... We are fortunate that such a lucid and well-written resource is an available guide." (Journal of the American Medical Association)