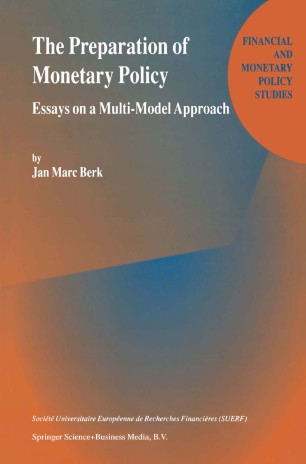 Essays on a Multi-Model Approach

Standard macroeconomic monographs often discuss the mechanism of monetary transmission, usually ending by highlighting the complexities and uncertainties involved in this mechanism. Conversely, The Preparation of Monetary Policy takes these uncertainties as a starting point, analytically investigating their nature and spelling out their consequences for the monetary policy maker. The second innovative aspect of this book is its focus on policy preparation instead of well-covered topics such as monetary policy strategy, tactics, and implementation. Thirdly, a general, multi-model framework for preparing monetary policy is proposed, which is illustrated by case studies stressing the role of international economic linkages and of expectations. Written in a self-contained fashion, these case studies are of interest by themselves.
The book is written for an audience that is interested in the art and science of monetary policy making, which includes central bankers, academics, and (graduate) students in the field of monetary economics, macroeconomics, international economics and finance.