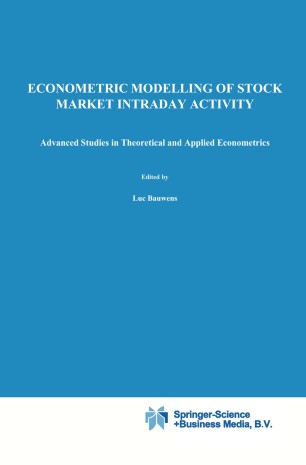 Over the past 25 years, applied econometrics has undergone tremen­ dous changes, with active developments in fields of research such as time series, labor econometrics, financial econometrics and simulation based methods. Time series analysis has been an active field of research since the seminal work by Box and Jenkins (1976), who introduced a gen­ eral framework in which time series can be analyzed. In the world of financial econometrics and the application of time series techniques, the ARCH model of Engle (1982) has shifted the focus from the modelling of the process in itself to the modelling of the volatility of the process. In less than 15 years, it has become one of the most successful fields of 1 applied econometric research with hundreds of published papers. As an alternative to the ARCH modelling of the volatility, Taylor (1986) intro­ duced the stochastic volatility model, whose features are quite similar to the ARCH specification but which involves an unobserved or latent component for the volatility. While being more difficult to estimate than usual GARCH models, stochastic volatility models have found numerous applications in the modelling of volatility and more particularly in the econometric part of option pricing formulas. Although modelling volatil­ ity is one of the best known examples of applied financial econometrics, other topics (factor models, present value relationships, term structure 2 models) were also successfully tackled.

Luc Bauwens is Professor of Economics at the Université catholique de Louvain, Belgium where he chairs the Department of Economics, and has been co-director of the Center for Operations Research and Econometrics (CORE) from 1992 to 1998. He has published several books and papers in the fields of Bayesian inference, time series methods, simulation and numerical methods in econometrics, as well as empirical finance and international trade. Pierre Giot is Professor of Econometrics and Quantitative Finance at Maastricht University in The Netherlands, and he is a member of CORE in Belgium. After graduating as a Civil Engineer (Polytechnique) in Electronics, he got his Ph.D. in Economics at the Université catholique de Louvain in 1999. His current research interests focus on quantitative finance, models for intraday data and empirical market microstructure.