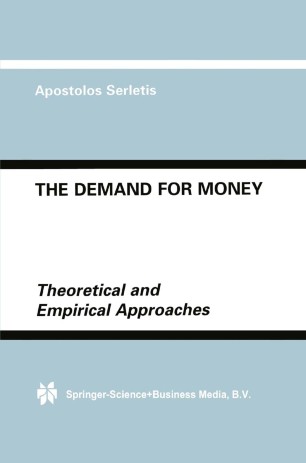 The Demand for Money

Almost half a century has elapsed since the demand for money began to attract widespread attention from economists and econometricians, and it has been a topic of ongoing controversy and research ever since. Interest in the topic stemmed from three principal sources. First of all, there was the matter of the internal dynamics of macroeco­ nomics, to which Harry Johnson drew attention in his 1971 Ely Lecture on "The Keynesian Revolution and the Monetarist Counter-Revolution," American Economic Review 61 (May 1971). The main lesson about money that had been drawn from the so-called "Keynesian Revolution" was - rightly or wrongly - that it didn't matter all that much. The inherited wisdom that undergraduates absorbed in the 1950s was that macroeconomics was above all about the determination of income and employment, that the critical factors here were saving and investment decisions, and that monetary factors, to the extent that they mattered at all, only had an influence on these all important variables through a rather narrow range of market interest rates. Conventional wisdom never goes unchallenged in economics, except where its creators manage to control access to graduate schools and the journals, and it is with no cynical intent that I confirm Johnson's suggestion that those of us who embarked on academic careers in the '60s found in this wisdom a ready-made target.