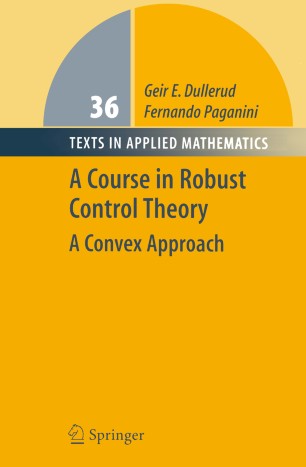 A Course in Robust Control Theory

Research in robust control theory has been one of the most active areas of mainstream systems theory since the late 70s. This research activity has been at the confluence of dynamical systems theory, functional analysis, matrix analysis, numerical methods, complexity theory, and engineering applications. The discipline has involved interactions between diverse research groups including pure mathematicians, applied mathematicians, computer scientists and engineers. This research effort has produced a rather extensive set of approaches using a wide variety of mathematical techniques, and applications of robust control theory are spreading to areas as diverse as control of fluids, power networks, and the investigation of feddback mechanisms in biology. During the 90's the theory has seen major advances and achieved a new maturity, centered around the notion of convexity. The goal of this book is to give a graduate-level course on robust control theory that emphasizes these new developments, but at the same time conveys the main principles and ubiquitous tools at the heart of the subject. Its pedagogical objectives are to introduce a coherent and unified framework for studying robust control theory, to provide students with the control-theoretic background required to read and contribute to the research literature, and to present the main ideas and demonstrations of the major results of robust control theory. The book will be of value to mathematical researchers and computer scientists wishing to learn about robust control theory, graduate students planning to do research in the area, and engineering practitioners requiring advanced control techniques.

From the reviews
"Because progress in LMI robust control theory has been explosive, only books published in the past 3 or 4 years can hope to adequatetely document the phenomenon. The textbook of Dullerud and Paganini rises admirably to the challenge, starting from the basics of linear algebra and system theory and leading the reader through the key 1990s breakthroughs in LMI robust control theory. To keep things simple, the authors relegate the issue of robustness against nonlinear uncertainties to the citations, focusing attention squarely on the linear case. (...)
The book would make an excellent text for a two-semester or two-quarter course for first year graduate students beginning with no prior knowledge of state-space methods. Alternatively, for control students who already have a state-space background."
IEEE Transactions on Automatics Control, Vol. 46, No. 9, September 2001
Buy options