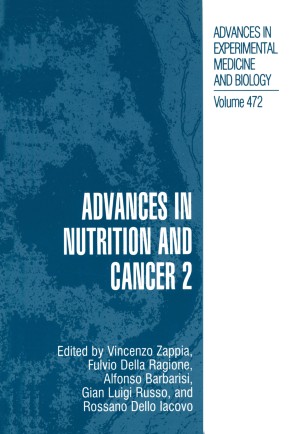 Advances in Nutrition and Cancer 2

Part of the Advances in Experimental Medicine and Biology book series (AEMB, volume 472)

This volume includes contributions presented at the Second International Sym­ posium on Nutrition and Cancer, held in Naples, Italy, in October 1998 at the National Tumor Institute "Fondazione Pascale." During the Conference, experts from different disciplines discussed pivotal and timely subjects on the interactions between human nutrition and the development of malignancies. Comparing the themes of this Meeting with those discussed at the First Sympo­ sium in 1992, the major scientific advancements certainly derive from the extensive use of molecular approaches to perform research in nutrition. Moreover, the fundamental observation of R. Doll and R. Peto (1981), which suggested that at least 35% of all cancers (with large differences among different tumors) might be prevented by dietary regimens, has been definitively confirmed by epidemiological studies. On the other hand, the relationships between diet and cancer are quite intricate and complex; it is difficult, and at the same time not methodologically correct, to reduce them to simple terms. Metabolic and hormonal factors, contaminants and biological agents, and deficiency of specific protective nutrients are all pieces of the same puzzle.

`...most are well referenced. As such, they may provide the non-specialist reader with an update and an entry point to the wider literature. ... the book would be a valuable addition to libaries but...'
Advances in nutrition and cancer 2 (2001)