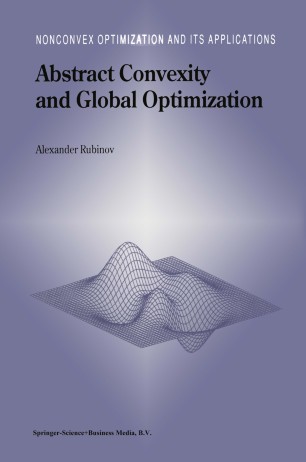 Part of the Nonconvex Optimization and Its Applications book series (NOIA, volume 44)

Special tools are required for examining and solving optimization problems. The main tools in the study of local optimization are classical calculus and its modern generalizions which form nonsmooth analysis. The gradient and various kinds of generalized derivatives allow us to ac­ complish a local approximation of a given function in a neighbourhood of a given point. This kind of approximation is very useful in the study of local extrema. However, local approximation alone cannot help to solve many problems of global optimization, so there is a clear need to develop special global tools for solving these problems. The simplest and most well-known area of global and simultaneously local optimization is convex programming. The fundamental tool in the study of convex optimization problems is the subgradient, which actu­ ally plays both a local and global role. First, a subgradient of a convex function f at a point x carries out a local approximation of f in a neigh­ bourhood of x. Second, the subgradient permits the construction of an affine function, which does not exceed f over the entire space and coincides with f at x. This affine function h is called a support func­ tion. Since f(y) ~ h(y) for ally, the second role is global. In contrast to a local approximation, the function h will be called a global affine support.