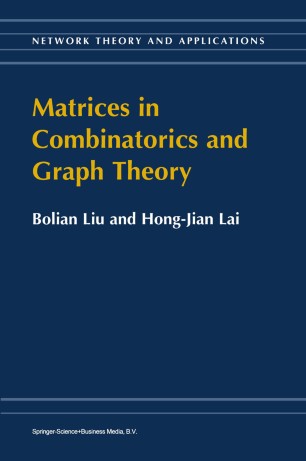 Matrices in Combinatorics and Graph Theory

Combinatorics and Matrix Theory have a symbiotic, or mutually beneficial, relationship. This relationship is discussed in my paper The symbiotic relationship of combinatorics and matrix theoryl where I attempted to justify this description. One could say that a more detailed justification was given in my book with H. J. Ryser entitled Combinatorial Matrix Theon? where an attempt was made to give a broad picture of the use of combinatorial ideas in matrix theory and the use of matrix theory in proving theorems which, at least on the surface, are combinatorial in nature. In the book by Liu and Lai, this picture is enlarged and expanded to include recent developments and contributions of Chinese mathematicians, many of which have not been readily available to those of us who are unfamiliar with Chinese journals. Necessarily, there is some overlap with the book Combinatorial Matrix Theory. Some of the additional topics include: spectra of graphs, eulerian graph problems, Shannon capacity, generalized inverses of Boolean matrices, matrix rearrangements, and matrix completions. A topic to which many Chinese mathematicians have made substantial contributions is the combinatorial analysis of powers of nonnegative matrices, and a large chapter is devoted to this topic. This book should be a valuable resource for mathematicians working in the area of combinatorial matrix theory. Richard A. Brualdi University of Wisconsin - Madison 1 Linear Alg. Applies., vols. 162-4, 1992, 65-105 2Camhridge University Press, 1991.