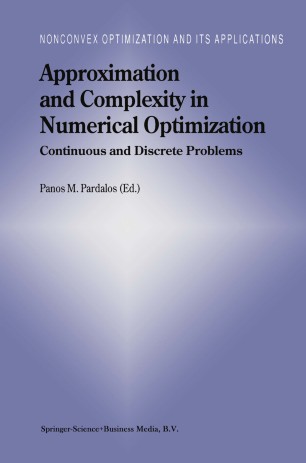 Approximation and Complexity in Numerical Optimization

Part of the Nonconvex Optimization and Its Applications book series (NOIA, volume 42)

There has been much recent progress in approximation algorithms for nonconvex continuous and discrete problems from both a theoretical and a practical perspective. In discrete (or combinatorial) optimization many approaches have been developed recently that link the discrete universe to the continuous universe through geomet­ ric, analytic, and algebraic techniques. Such techniques include global optimization formulations, semidefinite programming, and spectral theory. As a result new ap­ proximate algorithms have been discovered and many new computational approaches have been developed. Similarly, for many continuous nonconvex optimization prob­ lems, new approximate algorithms have been developed based on semidefinite pro­ gramming and new randomization techniques. On the other hand, computational complexity, originating from the interactions between computer science and numeri­ cal optimization, is one of the major theories that have revolutionized the approach to solving optimization problems and to analyzing their intrinsic difficulty. The main focus of complexity is the study of whether existing algorithms are efficient for the solution of problems, and which problems are likely to be tractable. The quest for developing efficient algorithms leads also to elegant general approaches for solving optimization problems, and reveals surprising connections among problems and their solutions. A conference on Approximation and Complexity in Numerical Optimization: Con­ tinuous and Discrete Problems was held during February 28 to March 2, 1999 at the Center for Applied Optimization of the University of Florida.