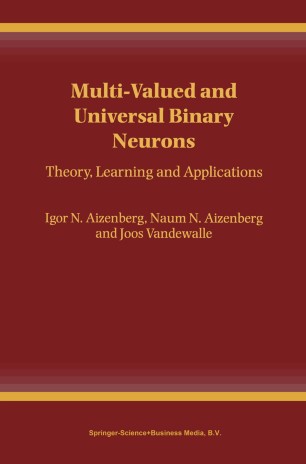 Multi-Valued and Universal Binary Neurons deals with two new types of neurons: multi-valued neurons and universal binary neurons. These neurons are based on complex number arithmetic and are hence much more powerful than the typical neurons used in artificial neural networks. Therefore, networks with such neurons exhibit a broad functionality. They can not only realise threshold input/output maps but can also implement any arbitrary Boolean function. Two learning methods are presented whereby these networks can be trained easily. The broad applicability of these networks is proven by several case studies in different fields of application: image processing, edge detection, image enhancement, super resolution, pattern recognition, face recognition, and prediction. The book is hence partitioned into three almost equally sized parts: a mathematical study of the unique features of these new neurons, learning of networks of such neurons, and application of such neural networks. Most of this work was developed by the first two authors over a period of more than 10 years and was only available in the Russian literature. With this book we present the first comprehensive treatment of this important class of neural networks in the open Western literature.
Multi-Valued and Universal Binary Neurons is intended for anyone with a scholarly interest in neural network theory, applications and learning. It will also be of interest to researchers and practitioners in the fields of image processing, pattern recognition, control and robotics.