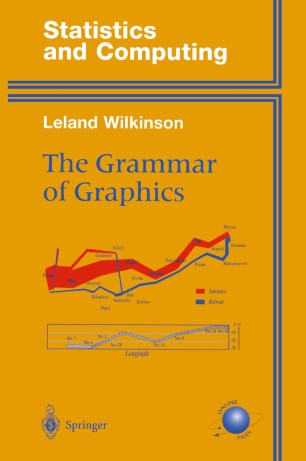 The Grammar of Graphics

Part of the Statistics and Computing book series (SCO)

Before writing the graphics for SYSTAT in the 1980's, I began by teaching a seminar in statistical graphics and collecting as many different quantitative graphics as I could find. I was determined to produce a package that could draw every statistical graphic I had ever seen. The structure of the program was a collection of procedures named after the basic graph types they p- duced. The graphics code was roughly one and a half megabytes in size. In the early 1990's, I redesigned the SYSTAT graphics package using - ject-based technology. I intended to produce a more comprehensive and - namic package. I accomplished this by embedding graphical elements in a tree structure. Rendering graphics was done by walking the tree and editing worked by adding and deleting nodes. The code size fell to under a megabyte. In the late 1990's, I collaborated with Dan Rope at the Bureau of Labor Statistics and Dan Carr at George Mason University to produce a graphics p- duction library called GPL, this time in Java. Our goal was to develop graphics components. This book was nourished by that project. So far, the GPL code size is under half a megabyte.