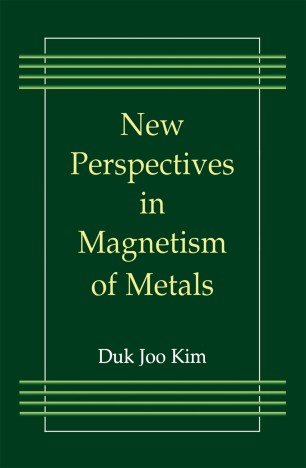 New Perspectives in Magnetism of Metals

The fundamental physics of metallic magnetism is not yet satisfactorily understood and continues to be interesting. For instance, although the detail is yet to be clarified, magnetism is anticipated to be playing a principal role in producing the high Tc superconductivity of the oxides. This book has two major objectives. First, it intends to provide an introduction to magnetism of metals in a broad sense. Besides pursuing the mechanism of metallic magnetism itself, it attempts to fmd and actively analyze magnetic causes hidden hitherto unnoticed behind various physical phenomena. My foremost goal is to expose the fundamental role played by phonons in the mechanism of metallic magnetism. I demonstrate how such a view also helps to elucidate a broad spectrum of other observations. The second objective is to concisely introduce the standard many-body points of view and techniques necessary in studying solid physics in general. The book is intended to be self-contained and starts with Chapter I containing a brief summary on the rudiments of quantum mechanics and statistical mechanics including the method of second quantization. In the same spirit, the foundation of magnetism in general is summarized in Chapter 2 and that for metals in particular, the Stoner theory, in Chapter 3. In Chapter 4, various linear responses of metallic electrons are systematically discussed with emphasis on the role of magnetism in them.