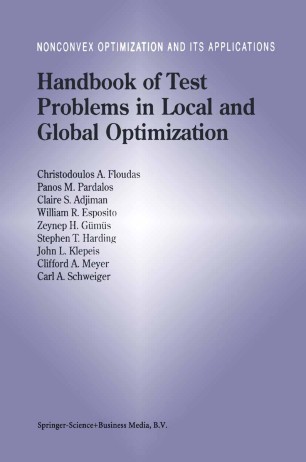 Handbook of Test Problems in Local and Global Optimization

Part of the Nonconvex Optimization and Its Applications book series (NOIA, volume 33)

Significant research activities have taken place in the areas of local and global optimization in the last two decades. Many new theoretical, computational, algorithmic, and software contributions have resulted. It has been realized that despite these numerous contributions, there does not exist a systematic forum for thorough experimental computational testing and· evaluation of the proposed optimization algorithms and their implementations. Well-designed nonconvex optimization test problems are of major impor­ tance for academic and industrial researchers interested in algorithmic and software development. It is remarkable that eventhough nonconvex models dominate all the important application areas in engineering and applied sci­ ences, there is only a limited dass of reported representative test problems. This book reflects our long term efforts in designing a benchmark database and it is motivated primarily from the need for nonconvex optimization test problems. The present collection of benchmarks indudes test problems from literature studies and a large dass of applications that arise in several branches of engineering and applied science.