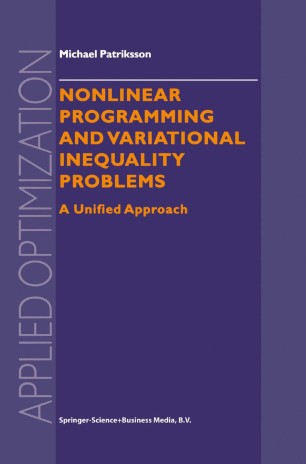 Since I started working in the area of nonlinear programming and, later on, variational inequality problems, I have frequently been surprised to find that many algorithms, however scattered in numerous journals, monographs and books, and described rather differently, are closely related to each other. This book is meant to help the reader understand and relate algorithms to each other in some intuitive fashion, and represents, in this respect, a consolidation of the field. The framework of algorithms presented in this book is called Cost Approxi­ mation. (The preface of the Ph.D. thesis [Pat93d] explains the background to the work that lead to the thesis, and ultimately to this book.) It describes, for a given formulation of a variational inequality or nonlinear programming problem, an algorithm by means of approximating mappings and problems, a principle for the update of the iteration points, and a merit function which guides and monitors the convergence of the algorithm. One purpose of this book is to offer this framework as an intuitively appeal­ ing tool for describing an algorithm. One of the advantages of the framework, or any reasonable framework for that matter, is that two algorithms may be easily related and compared through its use. This framework is particular in that it covers a vast number of methods, while still being fairly detailed; the level of abstraction is in fact the same as that of the original problem statement.