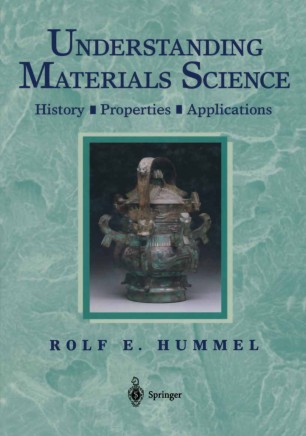 It is achallenging endeavor to trace the properties and the de­ velopment of materials in the light of the history of civilization. Materials such as metals, alloys, ceramics, glass, fibers, and so on have been used by mankind for millennia. Actually, materi­ als have shaped entire civilizations. They have been considered of such importance that historians and other scholars have named certain ancient periods after the material which was pre­ dominantly utilized at that respective time. Examples are the Stone Age, the Bronze Age, and the Iron Age. As time progressed the materials became increasingly sophisticated. Their proper­ ties were successively altered by man to suit ever-changing needs. We cannot but regard with utmost respect the accomplishments of men and women who lived millennia ago and who were ca­ pable of smelting, shaping, and improving the properties of ma­ terials. Typical courses on world history expose students mainly to the description of major wars, the time span important rulers have reigned, and to the formation, expansion and downfall of world empires. Very little is generally said about the people who lived and toiled in ancient times and about the evolution of civiliza­ tions. This book traces the utilization, properties, and produc­ tion techniques of materials from the Stone Age via the Bronze Age and the Iron Age up to modern times.