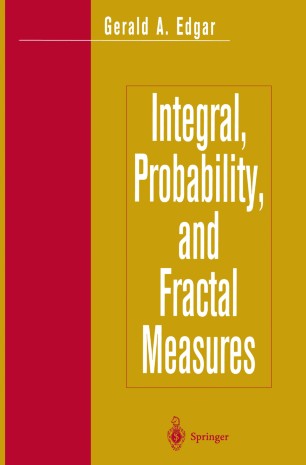 This book may be considered a continuation of my Springer-Verlag text Mea­ sure, Topology, and Fractal Geometry. It presupposes some elementary knowl­ edge of fractal geometry and the mathematics behind fractal geometry. Such knowledge might be obtained by study of Measure, Topology, and Fractal Ge­ ometry or by study of one of the other mathematically oriented texts (such as [13] or [87]). I hope this book will be appropriate to mathematics students at the beginning graduate level in the U.S. Most references are numbered and may be found at the end of the book; but Measure, Topology, and Fractal Geometry is referred to as [ MTFG]. One of the reviews of [MTFG] says that it "sacrific[es] breadth of coverage 1 for systematic development" -although I did not have it so clearly formulated as that in my mind at the time I was writing the book, I think that remark is exactly on target. That sacrifice has been made in this volume as well. In many cases, I do not include the most general or most complete form of a result. Sometimes I have only an example of an important development. The goal was to omit most material that is too tedious or that requires too much background.