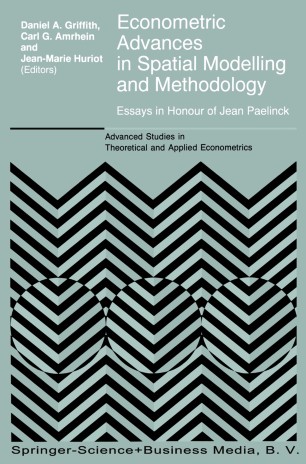 Essays in Honour of Jean Paelinck

The purpose of models is not to fit the data but to sharpen the questions. S. Karlin, 11th R. A. Fisher Memorial Lecture, Royal Society, 20 April 1983 We are proud to offer this volume in honour of the remarkable career of the Father of Spatial Econometrics, Professor Jean Paelinck, presently of the Tinbergen Institute, Rotterdam. Not one to model solely for the sake of modelling, the above quotation nicely captures Professor Paelinck's unceasing quest for the best question for which an answer is needed. His FLEUR model has sharpened many spatial economics and spatial econometrics questions! Jean Paelinck, arguably, is the founder of modem spatial econometrics, penning the seminal introductory monograph on this topic, Spatial Econometrics, with Klaassen in 1979. In the General Address to the Dutch Statistical Association, on May 2, 1974, in Tilburg, "he coined the term [spatial econometrics] to designate a growing body of the regional science literature that dealt primarily with estimation and testing problems encountered in the implementation of multiregional econometric models" (Anselin, 1988, p. 7); he already had introduced this idea in his introductory report to the 1966 Annual Meeting of the Association de Science Regionale de Langue Fran~aise.