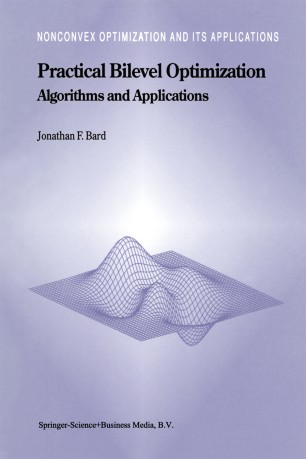 Part of the Nonconvex Optimization and Its Applications book series (NOIA, volume 30)

The use of optimization techniques has become integral to the design and analysis of most industrial and socio-economic systems. Great strides have been made recently in the solution of large-scale problems arising in such areas as production planning, airline scheduling, government regulation, and engineering design, to name a few. Analysts have found, however, that standard mathematical programming models are often inadequate in these situations because more than a single objective function and a single decision maker are involved. Multiple objective programming deals with the extension of optimization techniques to account for several objective functions, while game theory deals with the inter-personal dynamics surrounding conflict. Bilevel programming, the focus of this book, is in a narrow sense the combination of the two. It addresses the problern in which two decision makers, each with their individual objectives, act and react in a noncooperative, sequential manner. The actions of one affect the choices and payoffs available to the other but neither player can completely dominate the other in the traditional sense.