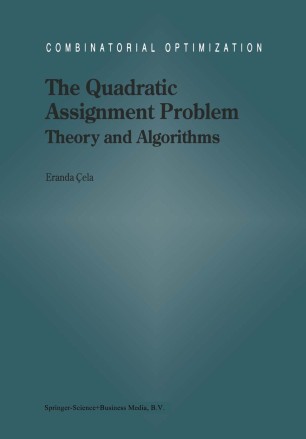 The quadratic assignment problem (QAP) was introduced in 1957 by Koopmans and Beckmann to model a plant location problem. Since then the QAP has been object of numerous investigations by mathematicians, computers scientists, ope- tions researchers and practitioners. Nowadays the QAP is widely considered as a classical combinatorial optimization problem which is (still) attractive from many points of view. In our opinion there are at last three main reasons which make the QAP a popular problem in combinatorial optimization. First, the number of re- life problems which are mathematically modeled by QAPs has been continuously increasing and the variety of the fields they belong to is astonishing. To recall just a restricted number among the applications of the QAP let us mention placement problems, scheduling, manufacturing, VLSI design, statistical data analysis, and parallel and distributed computing. Secondly, a number of other well known c- binatorial optimization problems can be formulated as QAPs. Typical examples are the traveling salesman problem and a large number of optimization problems in graphs such as the maximum clique problem, the graph partitioning problem and the minimum feedback arc set problem. Finally, from a computational point of view the QAP is a very difficult problem. The QAP is not only NP-hard and - hard to approximate, but it is also practically intractable: it is generally considered as impossible to solve (to optimality) QAP instances of size larger than 20 within reasonable time limits.