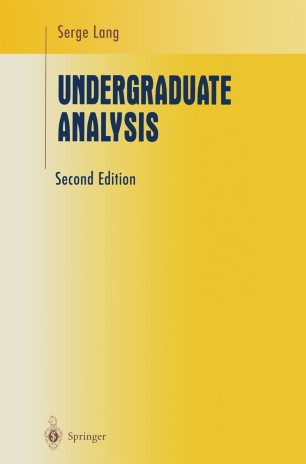 This is a logically self-contained introduction to analysis, suitable for students who have had two years of calculus. The book centers around those properties that have to do with uniform convergence and uniform limits in the context of differentiation and integration. Topics discussed include the classical test for convergence of series, Fourier series, polynomial approximation, the Poisson kernel, the construction of harmonic functions on the disc, ordinary differential equation, curve integrals, derivatives in vector spaces, multiple integrals, and others. In this second edition, the author has added a new chapter on locally integrable vector fields, has rewritten many sections and expanded others. There are new sections on heat kernels in the context of Dirac families and on the completion of normed vector spaces. A proof of the fundamental lemma of Lebesgue integration is included, in addition to many interesting exercises.

"[A] fine book . . . logically self-contained . . . This material can be gone over quickly by the really well-prepared reader, for it is one of the book’s pedagogical strengths that the pattern of development later recapitulates this material as it deepens and generalizes it."—AMERICAN MATHEMATICAL SOCIETY