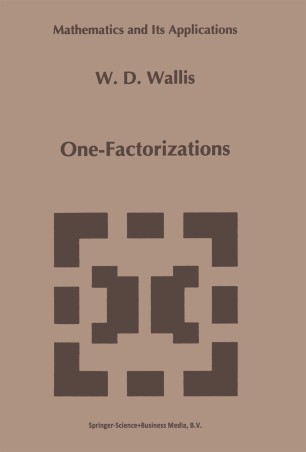 Part of the Mathematics and Its Applications book series (MAIA, volume 390)

This book has grown out of graduate courses given by the author at Southern Illinois University, Carbondale, as well as a series of seminars delivered at Curtin University of Technology, Western Australia. The book is intended to be used both as a textbook at the graduate level and also as a professional reference. The topic of one-factorizations fits into the theory of combinatorial designs just as much as it does into graph theory. Factors and factorizations occur as building blocks in the theory of designs in a number of places. Our approach owes as much to design theory as it does to graph theory. It is expected that nearly all readers will have some background in the theory of graphs, such as an advanced undergraduate course in Graph Theory or Applied Graph Theory. However, the book is self-contained, and the first two chapters are a thumbnail sketch of basic graph theory. Many readers will merely skim these chapters, observing our notational conventions along the way. (These introductory chapters could, in fact, enable some instructors to Ilse the book for a somewhat eccentric introduction to graph theory.) Chapter 3 introduces one-factors and one-factorizations. The next two chapters outline two major application areas: combinatorial arrays and tournaments. These two related areas have provided the impetus for a good deal of study of one-factorizations.