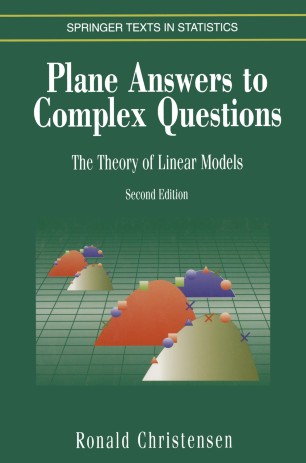 The Theory of Linear Models

The second edition of Plane Answers has many additions and a couple of deletions. New material includes additional illustrative examples in Ap­ pendices A and B and Chapters 2 and 3, as well as discussions of Bayesian estimation, near replicate lack of fit tests, testing the independence assump­ tion, testing variance components, the interblock analysis for balanced in­ complete block designs, nonestimable constraints, analysis of unreplicated experiments using normal plots, tensors, and properties of Kronecker prod­ ucts and Vee operators. The book contains an improved discussion of the relation between ANOVA and regression, and an improved presentation of general Gauss-Markov models. The primary material that has been deleted are the discussions of weighted means and of log-linear models. The mate­ rial on log-linear models was included in Christensen (1990b), so it became redundant here. Generally, I have tried to clean up the presentation of ideas wherever it seemed obscure to me. Much of the work on the second edition was done while on sabbatical at the University of Canterbury in Christchurch, New Zealand. I would par­ ticularly like to thank John Deely for arranging my sabbatical. Through their comments and criticisms, four people were particularly helpful in con­ structing this new edition. I would like to thank Wes Johnson, Snehalata Huzurbazar, Ron Butler, and Vance Berger.