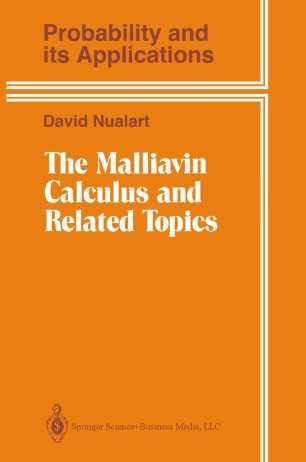 The Malliavin Calculus and Related Topics

The origin of this book lies in an invitation to give a series of lectures on Malliavin calculus at the Probability Seminar of Venezuela, in April 1985. The contents of these lectures were published in Spanish in [176]. Later these notes were completed and improved in two courses on Malliavin cal­ culus given at the University of California at Irvine in 1986 and at Ecole Polytechnique Federale de Lausanne in 1989. The contents of these courses correspond to the material presented in Chapters 1 and 2 of this book. Chapter 3 deals with the anticipating stochastic calculus and it was de­ veloped from our collaboration with Moshe Zakai and Etienne Pardoux. The series of lectures given at the Eighth Chilean Winter School in Prob­ ability and Statistics, at Santiago de Chile, in July 1989, allowed us to write a pedagogical approach to the anticipating calculus which is the basis of Chapter 3. Chapter 4 deals with the nonlinear transformations of the Wiener measure and their applications to the study of the Markov property for solutions to stochastic differential equations with boundary conditions.